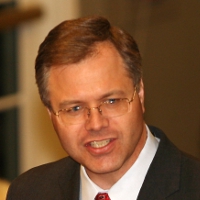 Bob Schaffer is the principal at Liberty Common High School, an award-winning charter high school and junior-high school in Fort Collins, Colorado, and serves as Chairman of the Leadership Program of the Rockies, a premier civic leadership training program in Colorado. He is also Trustee of Yorktown University, and serves on the board of the Colorado League of Charter Schools. Bob is the former vice-president for business development at a Denver energy company, and former Chairman of the Colorado State Board of Education.

Bob served nine years in the Colorado State Senate, where he was Chairman of the Senate Finance Committee. He then went on to represent Colorado’s Fourth Congressional District in the United States House of Representatives from 1997 to 2003. Bob left Congress to honor a voluntary term-limit pledge he had taken. Upon his retirement from the Congress, Bob was awarded the Benemerenti Medal by His Holiness John Paul II.

Bob was born in Cincinnati, Ohio. He graduated from the University of Dayton and received an honorary doctorate in management from Colorado Technical University. He holds a second-degree black belt in Tae Kwon Do.